And found some over the sea in Skye

I've been to Skye a few times but this was only the second time that I did actually go "over the sea". The first time in the 1980s was pre-bridge so there was no choice but subsequent journeys had gone by the land route. Return journeys had been made by boat, the short crossing from Glenelg (www.skyeferry.co.uk) and the longer one from Armadale, but getting there usually meant a rush to arrive before dinner, after a start at least an hour later than planned, so the road was the faster option. This time we were unusually punctual and the sign promising roadworks ahead was all we needed to opt for the Road to the Isles, and yes it really is called that, for Mallaig and the ferry. There was still no time to stop and I did manage to miss the Glenfinnan monument and viaduct while texting but it was a gorgeous journey. And then we sat on the deck of the MV Coruisk with tea and tablet and sailed over the sea to Skye.

We were having a clan MacStarke gathering in the northwest of the island at Glendale. With an outpost here at Colbost for me and Mr Starke. 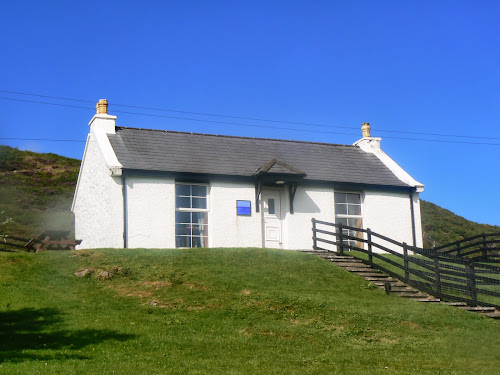 This little cottage, just for two, was very well equipped and dog-friendly. And no, I didn't have to rush outside during a five second sunshine opportunity, we had hot and sunny weather, specially up at the Lump watching the Highland Games www.skye-highland-games.co.uk

Perhaps these chaps would have welcomed some rain? 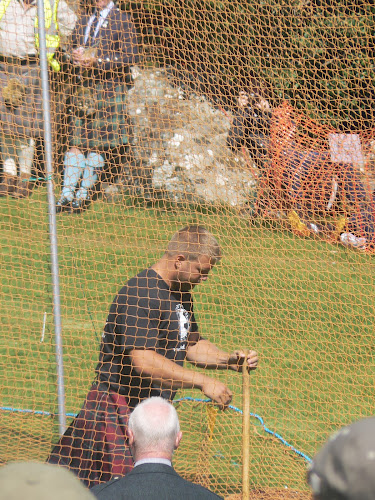 And piping's hot work too.. 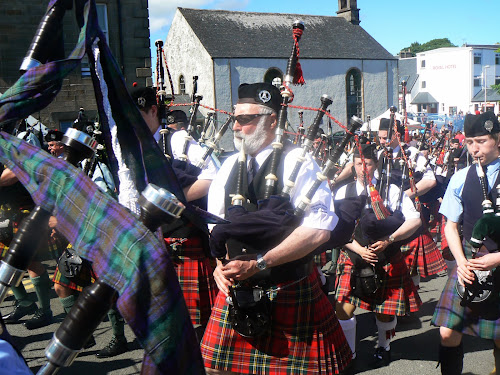 Looking down to the Cuillin 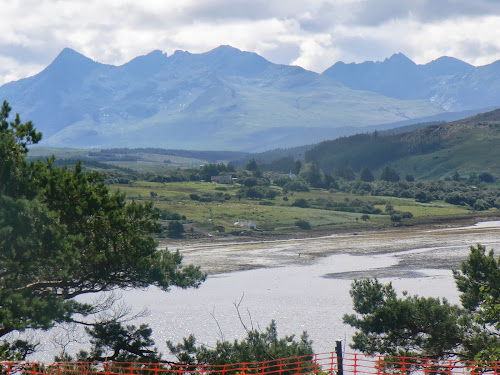 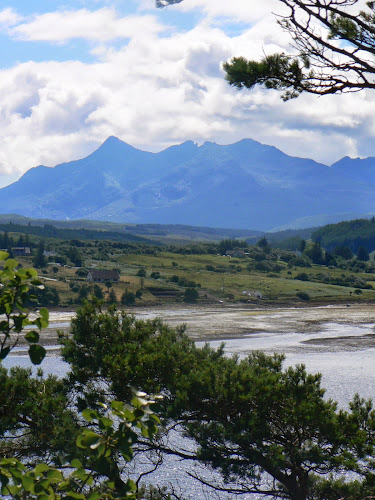 I didn't manage a swim this time just a paddle but Dogstarke had some nice early morning dips. 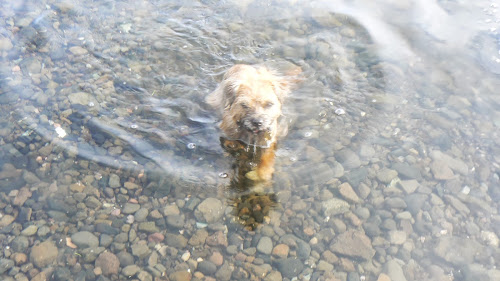 tho' one morning she was a bit upset to find these ladies had got to the beach first. 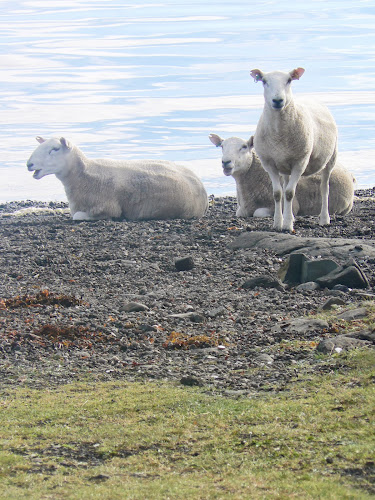 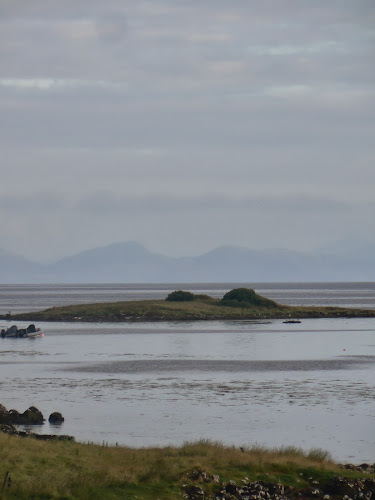 This beach was just in front of The Three Chimneys, www.threechimneys.co.uk which was just a short hop away from Mr Starke and me at Silverdale. Even in heels. And I didn't actually hop.

But I did enjoy some scrumptious food. We feasted on some of the best that Scotland has to offer; great raw ingredients made even more special by the great cooking. It was a feast for the eyes too, garnished with edible flowers and foraged plants. Tiny nasturtiums are peppery; who knew?

Like all the best gatherings there was lots of chat, retelling old stories and making new ones. Remembering the people who couldn't be there, thinking about ones yet to come. 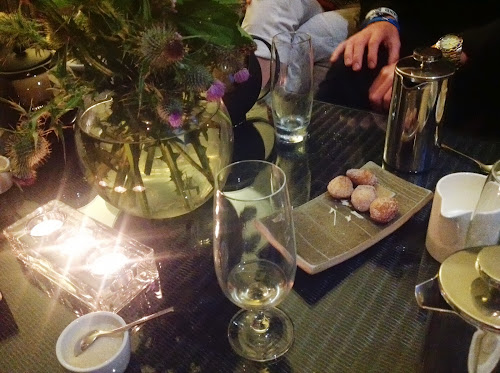 Finishing up in the House Over By, yes those are madeleines. But we started with cheese scones.

Posted by Marina Starke at 02:13 No comments:

No this has nothing to do with travelling or restaurants. I just really dislike celery. There are hardly any other foods I've encountered that I don't like, water chestnuts, peanuts; not keen on either of these, possibly allergic. But celery. Yeuch. An esteemed former colleague once described it as " the devil's food" and you know what? I think she was right. It looks good, it sounds crunchy but it tastes, *extremelydownturnedgrimacingmouth face* Bleugh. It tempted me from the Heinz salad cream adverts, where a generous dollop was poured along its curve. I hadn't tried it then but it summed up healthy, outdoors summer fun. This was '70's South Wales, we didn't have mayonnaise there, or barbecues. Hands up, I would still eat salad cream, I love its vinegaryness and still think an egg "mayo" sarnie is better for it. But celery? Nooooooo.

I think I can blame "A" level biology practical, we had to dissect it and suspend it in sugar solutions. It squirmed around convex, concave, all shrivelled up. Yup. I think that was what caused it. I've never been that keen on rat either.

For years I perfected hiding the little curly critters under other bits of rejected food. But that was hard, there wasn't often any other rejected food on my plate. I'd have to sacrifice the least delicious item to celery cover. Sometimes I'd get a double whammy, celery and peanuts in the same dish, not ordered deliberately of course but sneaked in as a garnish or poorly explained side salad. To hide all that lot I'd have to sacrifice a bit of the meat or fish. Yikes!

It's only in its raw state that I really can't eat it, I quite like it braised and I have been known to add it to stocks and sauces. Just as long as it reduces down from those infernal little crescents. Mr Starke hates it too, something we have in common, like alphabetising our books; and then fretting about the sub divisions of the alphabetising, but that's another post...

These days, steeled by trying to provide a good example to the young Masterstarke "go on try just a little bit..", I can force it down. You are much less likely to find it lurking in the rejected food on my plate. (You are very unlikely to find any rejected food on my plate). But don't hold your breath waiting for me to take a stick and use it to scoop up that dip. Even if it is salad cream.

Posted with Blogsy
Posted by Marina Starke at 05:54 No comments:

and is pretty keen on wild swimming

Despite my name none of my ancestors were seafarers. They all lived inland, working the land and later the mines, weaving silk and baking bread. But the sea has always had a massive grip on me, I loved childhood trips to the seaside, playing "I can see the sea!" games from the back of the car. Never mind the weather once we got there I'd been in my bathers and down to the sea. I think I learned to swim in the sea but I can't remember actually learning, I could just swim. Mind you I was a particularly buoyant child. There I'd be bobbing about in the waves while Mama, Papa and GlamourPuss shivered up on the sand. The latter most likely fully dressed and possibly in scarf and gloves too. Don't get me wrong, we had nice summers but my dips started with our first outing of the year at Easter, no matter how early it fell. In the summer Papa Starke would join me, and in the heat wave years, GlamourPuss could be persuaded but woe betide getting her hair wet. Our one full family trip abroad was revelatory. The sea was warm with no waves! It was the Adriatic where even Mama Starke was persuaded to get her bikini wet. It was nice but...

It didn't have the breakers I'd played in at Rest Bay in Porthcawl or my favourite Rhossili on the Gower. I loved the out of control feeling I got from the waves deeper out. I was much more adventurous in the sea than on land. Swimming was the one sport at school where my build and ability met. Friends of the GlamourPuss had a caravan at the seaside and a boat and water skis. Can you imagine my ten year old indignity and jealousy at being left out of her holidays with them, why didn't they invite me too?? It was almost as bad as not going to see The Osmonds, when I was the massively bigger fan and so much more likely to marry Donny.

I moved to Scotland and for a while didn't really realise that..I lived..beside the sea. And then I did. But back then the local beach wasn't so appealing for a dip and I rarely had the chance to travel out to the gorgeous beaches of East Lothian. When I did, even on the hottest day, the chill of the North Sea came as a bit of a surprise. I stayed and got older and much, much wimpier. Years passed and I barely dipped a toe in.

The urge never went away though. I still felt the same excitement at any glimpse of the "proper" sea. I made my first trips to the Med. It was sparkly and blue but like the Adriatic a bit tame.


Another first, this time inter continental travel. If I'd known that our flight to Curaçao included a touch down at St Maarten (in a 747, look for the videos) I might have had qualms. It was great though and gave me my first view of the Caribbean. Now that was proper sea, but warm with fishes. Every morning we got up early and had a good long swim before breakfast. One day with Mr Starke busy conferencing I decided to swim out past the very small headland into the next bay. For the first time in years I felt the power of the sea. And realised how small I was and probably invisible to boats and jet skis. I'd lost my childhood bravado and turned back, but I returned later with Mr Starke and we did it together. Arriving on the neighbouring beach felt like a proper expedition. 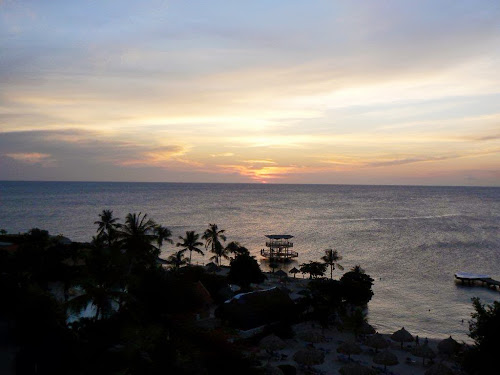 Last summer, Australia. I squeezed myself into a wetsuit and tried snorkelling for the first time. Not holding my breath was a challenge at first but once I got then hang of it, wonderful. 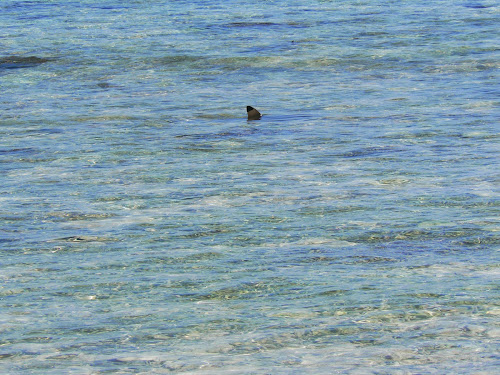 Yes that is a shark but a tiny harmless one

Autumn 2012 we welcomed our new arrival, Dogstarke and she has proved herself to be a salty seadog and loves swimming too, but she likes to have company, so I've done a fair bit of paddling. I expected to do some proper swims on our holiday to Ile de Re this summer but all the best beaches had signs a bit like this 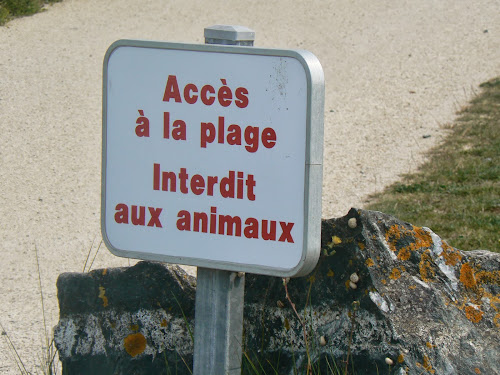 And it would have been mean to go in on my own, so we stuck with (tri)cycling

I felt cheated though. I really wanted to swim in the sea again. And then we had a heat wave. Cue more paddling at our city beach. It was a bit murky to risk full immersion I thought. Masterstarke did and came out strangely tanned -was it a critical mass of FakeBake precipitating out? A better bet on a gorgeous sunny day was Kingsbarns in Fife. There the water was clear and very, very cold. Full immersion but only a few splashes and I was out. This seemed ridiculous, I've got more blubber now than in my chubbiest youth, why couldn't I stay in longer? WasI just becoming a terrible wimp? Does 400 miles make that much difference to the temperature?

Last weekend I got my answer. It's not so much the latitude as the longitude that counts. We were enjoying ourselves at Portavadie on Loch Fyne. I had a paddle with Dogstarke and wanted more. It was gorgeous, a little pebbly on approach yes but really, "lovely once you're in", I even liked the feeling of the seaweed between my toes. My only disappointment? I failed to persuade Mr Starke to join me. I couldn't really complain, he was skimming stones for Dogstarke. 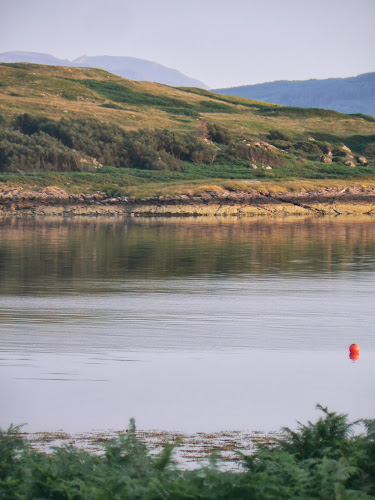 So it seems that the west coast, washed by the Gulf Stream is warmer. Perfect for swimming? And the midgies can't get you offshore.

I'm off to Skye soon, hopefully I'll be able to test my theory there.

Posted by Marina Starke at 16:06 No comments: