And remembers her trip beyond the sun....

Actually it was almost true. A couple of weekends ago, on a gloriously sunny afternoon, MrS and I went for "a wee drive", and as I'm always keen to stretch a day trip to its limits we needed to fill up with petrol. In fact MrS was getting a bit twitchy that we may have gone beyond the point where miles to next fill up exceeded miles left in tank. Twitchy was heading towards tetchy when my confident ( but with fingers crossed) assertion that " I'm sure there's a garage here....." manifested as reality. It was chilly getting out of the car and I remarked on that to the cashier "....Oh yes, we won't get the sun here now until March...". It was just past midday.

Tank full we could continue along a road that has intrigued me many times. If we'd ever managed so far north on childhood trips my curiosity might have been satisfied sooner; back in the '70s before the Ballachulish bridge opened, travellers either crossed Loch Leven by ferry or took the long way round via the head of the loch and Kinlochleven. Now the A82 emerges blinking from Glencoe and speeds north across the bridge to Fort William and Inverness, signs pleading for a detour ignored until now.

Once after a swish past, I must have looked it up. Kinlochleven. What I learned made me desperate to go there. Even its own website kinlochleven.co.uk calls it "The hidden village in the highlands". I imagine it's mostly seen the back of the sun until the spring and its time in the sun was decades ago. On our visit it was laced with mist.

Kinlochleven is a manufactured community, before the early 1900s it was just two small crofting settlements on either side of the river Leven. Then a huge industrial plant was built, an aluminium smelter and a hydro scheme to provide power. Homes had to be built for the management and workers and so a town which wouldn't look out of place on the outskirts of London grew up in a valley in the highlands of Scotland. I have a bit of a thing for planned settlements so it wasn't unattractive to me, plus it's also post industrial (the smelter closed in 1996) and has an abandoned hotel high up in the hills overlooking it. 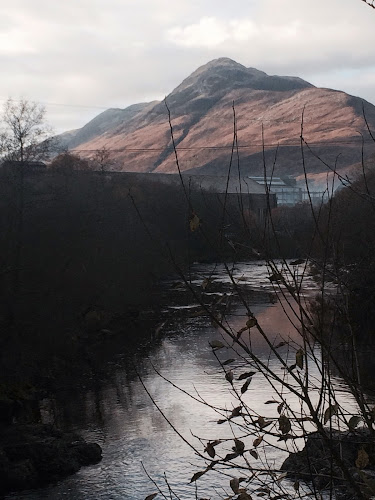 View towards old industrial buildings
Luckily the town hasn't been abandoned, it's the penultimate stop on the West Highland Way so gets lots of (tired)footfall from that 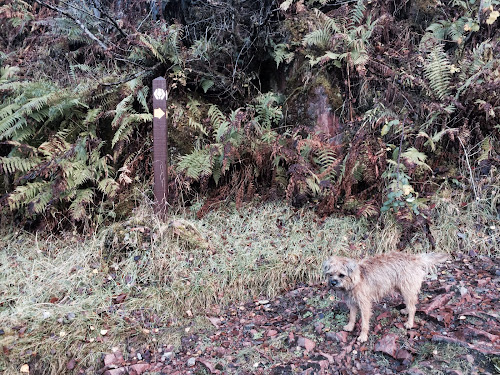 Dogstarke on the West Highland Way.
One of the old industrial buildings now houses The Ice Factor, a huge indoor ice climbing wall and another a micro brewery. It's also popular with mountain bikers. Neither activities I take part in, but as Miss Brodie said of the Guides...................* There was a biking event on the day we were there; its bright pennants and pumping music added to the slightly surreal air. I couldn't help thinking of the recent TV programme "Les Revenants", there's a dam high above this town too, with stories told about the lives lived and lost building it. 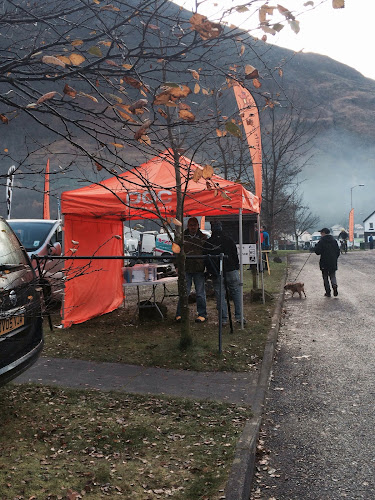 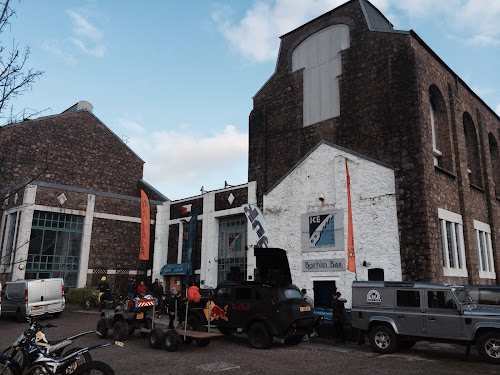 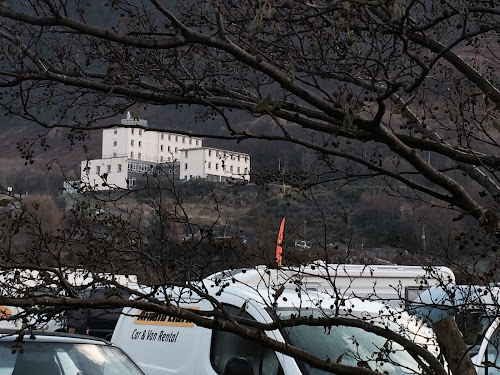 The story of the town is told in an exhibition within the Post Office building but it was closed when we visited. So we'll need to go back. But perhaps when the sun does. 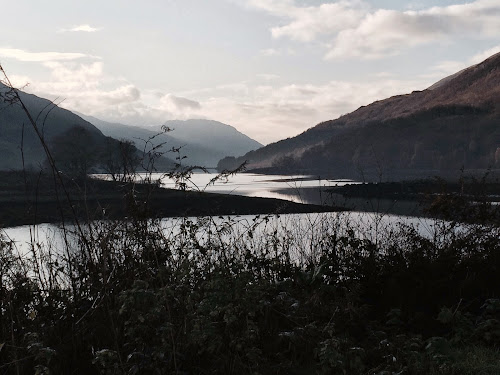 * {"For those who like that sort of thing" said Miss Brodie in her best Edinburgh voice, "that is the kind of thing they like" } "The Prime of Miss Jean Brodie" Dame Muriel Spark (1961)

Posted with Blogsy
Posted by Marina Starke at 10:15 No comments:

On Hallowe'en MrS and I found ourselves in Inverness. MrS had to work (shame) and while he was at his meeting I took Dogstarke for an explore. It had been a little while since I'd been there, and all our visits have been work related (for MrS at least) though we did manage to indulge ourselves on visits by staying at Rocpool Reserve. Since Dogstarke came to stay that hasn't been an option and I've yet to find a dog friendly alternative so I've tended to stay at home. This recent visit could be done as a day trip though, so DogS and I tagged along.

I'd wondered whether to explore out of town either Cromarty on the Black Isle or up to Tain to visit Anta but after a long journey I didn't really fancy getting back in the car; the sun was shining and DogS always opts for walkies so our choice was made. We were lucky with that sunshine too because the level of the river told a tale of heavy rain and the Ness islands were closed, with signs warning of the cancellation of the planned Hallowe'en party. If you don't know Inverness, the river Ness flows, sometimes very fiercely, through the centre, there's a history of severe floods; but on a sunny day it's nice to amble along the tree lined walkway. It criss crosses by a number of bridges, at least two of these with alarmingly "soft" suspension so I kept a tight hold on Dogstarke's lead and was very grateful for the closely woven mesh sides. Not that I'm a wimp or anything.......but I did have to keep telling DogS that it was "a very big river, too big for little dogs". Even ones who love to swim. Actually particularly for ones who love to swim.

Inverness was the destination of my first expedition out of Edinburgh after I'd moved there to study. My boyfriend had a local friend who showed us around and so I had my first non sighting of Nessie, a trip to Urquhart castle and back in the days of more predictable weather, marvelled at a frozen loch high in the hills above the famous one. That icy loch was just my first experience of Scottish winter, the same year I saw Duddingston and Loch Leven frozen solid.

I can't remember exactly when we made that trip, first term probably, so most likely November. This October 31st it was warm enough to set my lunch outside 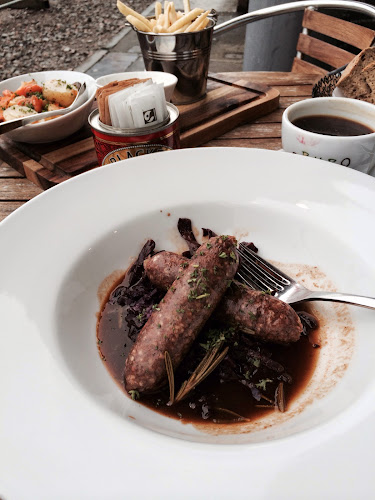 And yes, greedy guts was eating alone, but in my defence I hadn't read the menu properly and didn't eat the chips(fries).

Not everything had changed though. I took this photo (below) in 1983 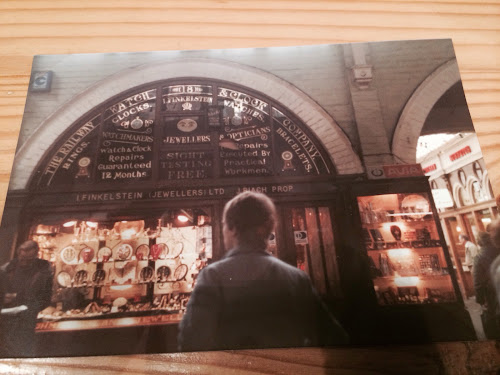 And the Victorian market still exists, and didn't appear to have a dog ban so both of us were able to explore. In fact, I shouldn't complain about the unseasonably warm weather, because otherwise I'd have had to go hungry or banish DogS to the car while I ate inside as I didn't find any other dog friendly places, must research better next time.

What I did find was weddings, at least four, including one bride in a gown trimmed with seasonal black lace attended by black clad maids. They must have been relieved by the sunshine on their big days; I hope good times were had by all.

Our drive home took us along the banks of Loch Ness, with another non sighting, perhaps it was too dark, perhaps she was hiding from the rain which had returned with a vengeance, perhaps she's just shy?

Posted by Marina Starke at 09:03 No comments: